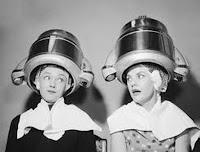 I’ve known Pam for over 34 years – we were newborns then!  …Yeah, right.  Anyway -   Pam and her sister very kindly approached me at the school bus stop when I first moved into the neighborhood and, as it turned out, lived right across the street from me.  We became fast friends.  As I got to know her, it became obvious that Pam was very creative and artistic.  We became the best of friends and I was very sad when she had to move a few years later.  We kept in touch for a while but lost track of each other around 1985 or so.  Fast forward to April of 2007 and lo and behold!  Pam and I find each other in a small online group!  After more than 20 years!  Here we were doing the same sort of art and unknowingly making the same online friends.  Small world, eh?
When we connected and started talking, Pam told me that she was going to try getting published in a couple magazines. Well, of course they loved her work - and her!  She quickly became a favorite in the world of mixed media publications.  I was (and still am) so proud to know her!  After generously sharing her techniques and work with people via magazines and online classes, Pam started writing her book.  I was so excited for her! 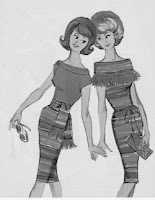 When Pam asked me to be in the book I sort of panicked.  What?  Stop having cocktails for breakfast, Pam!  Be in a book about finding time for art?  I need that book!  My work area is always a disaster and that disaster grows like a flood plain during monsoon season. I’m volunteering for my daughter’s school about 3 times a week and I usually work on 3 or 4 fundraisers a year for it. My daughter has autism, so I work with her after school and on weekends on socialization issues.  My husband has an active vintage bicycle hobby and we produce two big events a year.  Our house is miniscule and I certainly don’t have a “studio.” The amount of art Pam and many of my other online friends produce astounds me.  Why on earth would anyone want me to be in a book about making time for art? 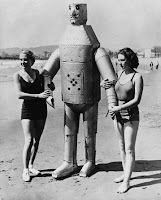 Oh – wait!  Despite all of the above, I was listening when Pam first told me about how she finds time for art in her life. I actually do produce some art from the jumble of supplies that inhabit my work area.  I may not work on things every day, but that’s me – busy and running around, and needing some down time when I stop moving.  (And there’s that small matter of my computer game addiction…)   I realized that I do make “art at the speed of life;” the speed of my life.  So I would say, don’t be intimidated by your schedule and time constraints.  And don’t put pressure on yourself to be productive in a way that doesn’t work for you.  You can find time in your life for making art.  I do, and, frankly, I’m kind of lazy!
Posted by Loudlife at 3/12/2011 04:00:00 AM 6 comments:

The Trials and Tribulations - and Completion! - of a Painting...Plus a Really Cool Real Cake!

So here is the process I went through for the "Let Them Eat Cake" painting.  I started out taking photos of each step, and did really well for a while; unfortunately, once I got started on the actual picture, I got so caught up in it that I forgot to take photos!  Oh, well. 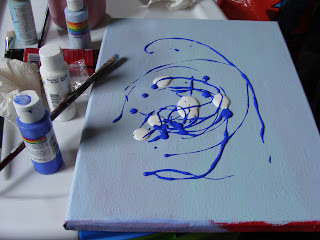 Okay, here's the blue on the red.  I didn't like the blue paint that I had on it, so I tried mixing another color.  Here it is with the two separate colors.  After it dried, I did another sketch right on the canvas.  This one I did with watercolor pencil.  I like using watercolor pencils for sketching on paintings.  They're so easy to erase and don't leave residue for the most part.  Sometimes I can't get charcoal pencil off the paint when I make a mistake and if I've custom mixed the background color, painting over it becomes a hassle. 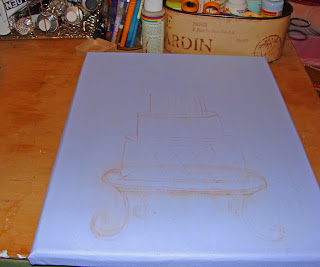 After I sketched it I realized two things.  One, the cake plate was way out of proportion to the rest of the cake.  Two, I still hated the background color, waaaaaaaay too bright.  (It's hard to tell in the photo, you'll have to take my word for it!) I started to wipe off the sketch and then realized  that it didn't matter if I was just going to paint over it - plus I still needed to take this photo.
You know what that meant, right?  Shopping!  Oh, yeah...  Took a quickie trip to Michaels because I was sure I had gotten Golden liquids there before.  Wrong.  The good news about that is that I didn't have to make a total decision on the color there at the store.  The paints they had were cheap enough that I could pick out a couple colors to try and pick up another bottle of my favorite green. 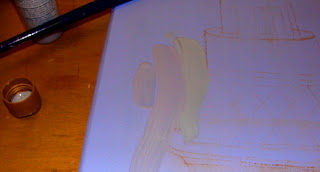 Here is me throwing a couple sample strokes of paint at the painting.  Even though they both looked quite blue in the bottles, against the brightness of the blue underneath one looked gray and one looked green!  Agh!      So I decided to mix them together and see what happened.  I didn't mind it, it need a little somethin', somethin, but overall was happy with how the color was turning out. 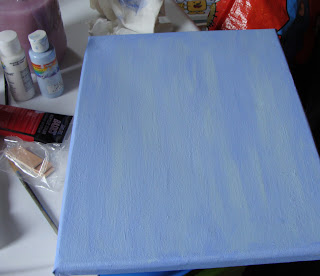 But then, ack!  I realized that there were some very unsightly bumps on the canvas!  (Help!  Canvas ProActiv, STAT!)  So I tried sanding them down and painting over them.  While the bumps felt smooth, as soon as I put paint on them, they showed up big time.  Sigh. 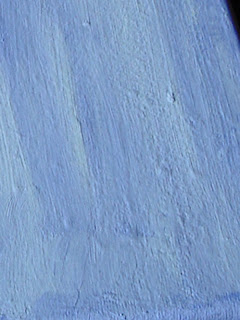 So I was like, "Okay, I'll put some molding paste on the canvas!  No problem!"  Oh, lordy!  So far from even, it just started creating more oddness.(That's wet paint from when I was painting over the sanded part and the white part is the molding paste that I gave up on.) 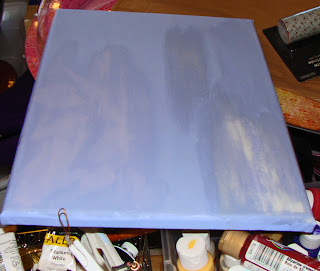 So I just pulled out another canvas and picked one of the new paints - the aforementioned grey looking one that looked perfectly lovely and blue when it wasn't on top of the other, brighter blue - and painted yet another background.  Which, yes, I forgot to photograph!
Then, while that was drying, I sketched, cut out, and outlined the vintage dictionary page that I was using for the cake plate.  I love my vintage dictionary!  It is one of those gigantic, 6 inch ones from the late forties and has awesome color pictures of different species of animals, birds, reptiles and the solar system.  It also has maps of the world, and charts for the moon phases and other fun stuff.  It belonged to a boy that lived next door to my husband when he a little kid.  One day my DH took me on a drive and showed me his old house - he hadn't been there in years - and the neighbor was having an estate sale because she was moving into a nursing home.  It was the same neighbor, the boy's mother, after all this time!  Her son had written his name in his little-boy handwriting on the cover, so I think of the coincidence of that day every time I pick it up.
I also went over to the computer and experimented with fonts for the "Let Them Eat Cake."  I printed it out and, because I have an ink jet printer and it will otherwise smear with the slightest moisture, I sprayed the printout with a clear, matte, quick-drying finish.  I cut out the words and inked them up a bit so that they didn't look so starkly white.  Then I outlined the words with a dull-ish charcoal pencil.  In some sort of elven magic way, if I write on the paper soon enough after spraying, the charcoal seems to meld with the spray and doesn't smear when I run my finger over it.  I've no idea why not. 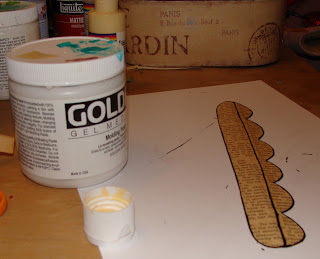 Then I got to painting - and forgot to take any pictures!  So here is the finished product.  I know it doesn't appear that the original blue and this blue are all that different - but they really are quite different from each other!  And isn't this cake plate so much more in proportion than it was in either of the sketches? 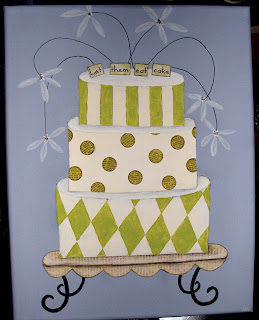 The other thing I was going to show you was this amazing cake I saw at a 6 year-old's birthday party that we went to.  It was FANTASTIC!  The little girl's grandmother made it and she is NOT a professional.  Can you  believe it???  She made each and every thing.  5 little fairies and each one has completely different hair!  One of them even has ringlets!  There is a teeny, tiny, little tea party on the stump; teeny, tiny teapot, teeny tiny cups, and little pinwheel rolls and a tiny cake.  Each cupcake had a big flower, 2 little flowers, and 3 leaves; and each flower and leaf was hand-painted!  Besides what you see here, there were 30 more cupcakes lined up on 3 long tables for the kids.  I talked to Hollie, the little girl's mother, and she told me that her mom had always made amazing cakes for birthdays.  Can you imagine the amount of work that went into this???  Geez!  It was all I could do to get to the store to pick up the cupcakes for Rexy's class on her birthday.   I mean, I can sort of see doing it as a grandmother or an aunt (my sister makes really awesome cakes for Rexy's birthday parties) but when you actually have children at home???  I would be calling for cocktails before the third flower was painted - frankly, before it was even iced!  I'm thinking of sending this to Cake Wrecks for the day she shows the pretty cakes (Fridays?  Sundays?  I forget.). 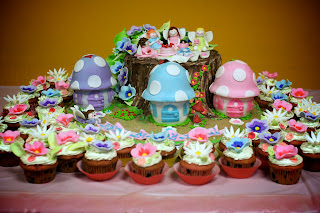 Lastly, a quick reminder that we're having the Art at the Speed of Life Blog Tour right now! 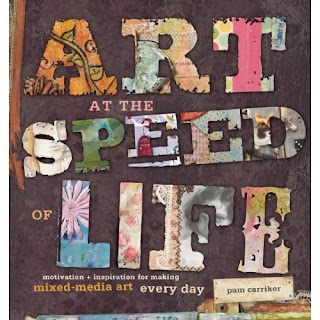 Art at the Speed of Life Blog Tour 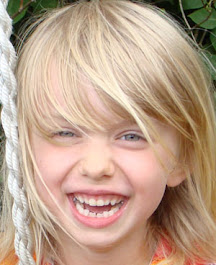 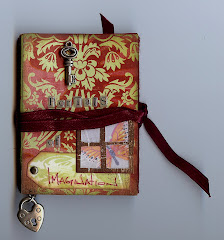